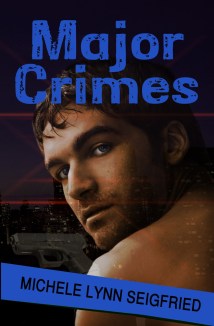 Buckle up for hours of laughter, romance, and excitement with this Jersey Shore Mystery. When handsome detective, Bryce Kelly, is accused of a crime he didn’t commit, he finds himself on the run and in hiding. Can amateur sleuth, Chelsey Alton, and a few quirky friends help him find the real killer and prove his innocence before it’s too late? If you love mysteries, don’t miss this humorous whodunit!

Major Crimes is a quick, light read. You can easily finish this one on a Sunday afternoon curled up on the sofa. I did find the writing a bit repetitive. Seigfried often shows the reader a point and then, in case you missed it, tells us as well. And personally I thought there were too many details. The blow-by-blow explanation of trip after trip to the porch didn’t feel necessary to me, but I’m wondering if that’s because my sense of humor is different than the writer’s.

The mystery itself was a bit different than typical cozy mysteries in that Chelsey’s position at the PI’s office meant they had access to more gadgets than the usual heroine in a cozy. The speed at which forensics were performed was a bit too fast for real life but that didn’t bother me. It kept the action moving.

I liked Bryce. Like most men, he did annoy me a bit with being mysterious about details when Chelsey was putting herself on the line to help him. I’m still not sure what I think of Chelsey. I admired her desire to help Bryce despite the personal risk, but she was a bit of an airhead. Of course her inept ways did lead to some funny moments. The scene in the frozen yogurt shop was a favorite of mine. But why in the world did she have three men in her life? Especially how that all ended. Because I did unfortunately hate the ending.

This is a great read for lovers of cozy mysteries.

Michele was born and raised in New Jersey. In her mystery novels, she draws from her personal expertise in the area of municipal government, in which she has served for over 17 years in two different municipalities.

In combining her love of writing with art, Michele began writing and illustrating children’s picture books in 2013.  She has won several awards for her novels.

4 thoughts on “Review of Major Crimes by Michele Lynn Seigfried”