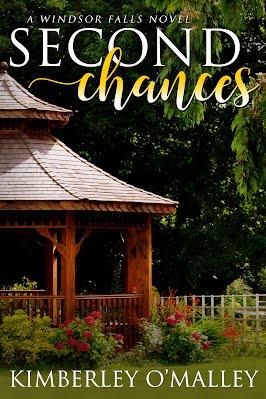 Dr. Charlotte Avery is the newest resident of Windsor Falls, North Carolina. Just back from the war-ravaged plains of Africa, Charlie only wants to settle into her new life and to reconnect with Elizabeth Fitzgerald, her best friend from residency. What she doesn’t expect, or need, is the instant attraction she feels for Elizabeth’s brother-in-law, Brendan. A single dad, Brendan Fitzgerald isn’t interested in anything that will further complicate his life. Will they be open to a second chance?

Charlie leaned against the wall for a moment to ground herself. One day, the feeling of loss wouldn’t haunt her. She had to believe that. Angry sounds broke her reverie. Instinct kicked in. She followed the sound around the corner and back to the triage desk. And stopped. Her heart thudded at the sight of a very handsome man. He was also the source of the noise. She listened to the triage nurse attempt to calm him.

He pulled a hand through his raven hair. “I don’t have time for this. I need to find my daughter.” His blue eyes scanned the area.

“Maybe I can help.” Two pair of eyes turned towards her as Charlie stepped into the fray. The nurse’s were tinged with relief. Annoyance passed through his as the man swept his gaze over her. And dismissed her. She was a beautiful woman used to men taking a second look. Not this one, but then he did have more important things on his mind. Or rather, an important person.

“Are you Mr. Fitzgerald, by any chance? Here to see Abby?” Charlie spoke in a soothing tone.

The man took a deep breath and blew it out. “Yes, I’m Abby’s father, Brendan Fitzgerald.”

“I brought Abby in. I’d be happy to take you to her. I know she’ll want to see you.” She took him by the wrist, ignoring the warmth that spread up her arm at the contact. Without giving him a chance to argue, she led him away from the desk.

“I’m Charlie. I was there at the park. She’s doing great. Her wrist may be broken. They were doing X-rays when I left her, but I think it’s just a simple fracture. A few weeks in a cast, and she’ll be good as new. Won’t even have to give up swimming this summer.”

Brendan stopped walking and planted his feet, no longer allowing her to shepherd him. She jerked to a halt. She craned her neck. At almost six feet tall, she normally didn’t have to look up to meet someone’s gaze. But Brendan had three or four inches on her, not to mention the work boots he was wearing. She remembered that his family was in construction. He looked the part, with well-worn jeans molding his legs. A forest green t-shirt with ‘Fitzgerald Construction’ written on it stretched across his muscular chest.

“Look, Charlie, I’m not trying to be rude, but I need to see my daughter. Now. Please let go of me.”

Charlie looked down to where her hand was still attached to his wrist. She dropped it immediately, heat crept up her neck. “Sorry”, she muttered.

Kimberley O’Malley is a recent transplant to Charlotte, North Carolina from the frozen North. She is learning to say y’all but draws the line at sweet tea. Sarcasm is an art form in her world. When not writing, she is a full-time nurse and part-time soccer Mom, but not necessarily in that order. She shares her life with an amazing husband of more than twenty years, two teenagers, and one very sweet Shetland Sheepdog, Molly.
Contact Links
Website
Facebook
Twitter
Blog
Goodreads

Great evening listening to @jennifereganwriter discuss her new book, The Candy House, which I - of course - bought and she signed *squeal* #authortalk #borderkitchen
It’s a beautiful day for a picnic on the water. My butt is killing me after biking and paddleboating. #sunnysunday #picnic
Nice weather which means it’s time to play hooky! Too bad I ordered the wrong drink 🥴 Oh well. Best I drink it any way. Don’t want to waste. #thirstythursday #sunnyday
Sun is shining! Hubby is home! Time to hit the beach for a cold one. #mondayvibes #beachlife #biertje
It's release day 🥳 Forever For You, the 2nd book in the Winter Falls series, is out now! Ashlyn cannot wait! She's going to convince Rowan she's the woman for him whether he wants her to or not. #newrelease #romancebooks #romance #romcombooks #romcom
The history geek strikes again! Castle? Great! Castle with dungeon? Awesome #vacation #history #montjuic
Loading Comments...
%d bloggers like this: