Book 5 of the Death by Cupcake series 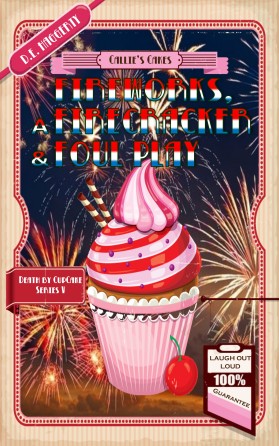 The last thing Anna needs two weeks before her wedding is the groom winding up in jail for murder. Nothing and nobody is going to ruin her perfect July 4th wedding. And no way is she getting married in the jailhouse. Not happening. Instead, she’s off to uncover the actual murderer, because there’s no way her fiancé Logan would hurt anyone. He’s a cop. He fights crime. He doesn’t commit it!

Will the gals of Callie’s Cakes solve the mystery before Anna’s wedding is ruined?

Cupcakes not included, although recipes for all the delicious cupcakes Anna bakes are.

Today’s lockdown recipe is coconut curry chicken fingers with cashews. The coating didn’t turn out as we hoped but we are already discussing ways to improve tge recipe. #lockdownlife #saturday #foodie #foodiesofinstagram #cooking #cookingathome
writing a book about an American lawyer falling in love with a Dutch guy is bringing back TONS of memories.
Um.. WTH April? April showers are okay but they should be rain not freaking snow. I am not amused Mother Nature #aprilweather #snowinapril #weather
Um... who ordered the cold weather? Wednesday I played tennis is a skirt and tshirt. Today I was bundled up 🥶 I want spring weather back! *Stomps foot* #saturday #walking #weekend #coldweather
I needed a bit of cheering up this morning. The hubby came back from grocery shopping with these ❤️❤️❤️ Spring in Holland isn’t bad #spring #tulipsofinstagram #tulips
I think I’m in a dream. Best dream ever. Sun. 🌞 And warm weather. Rain? Not today 🥳 #springweather #sunshine
Loading Comments...
Comment
×
%d bloggers like this: